Posted on December 23, 2009 by Administrator 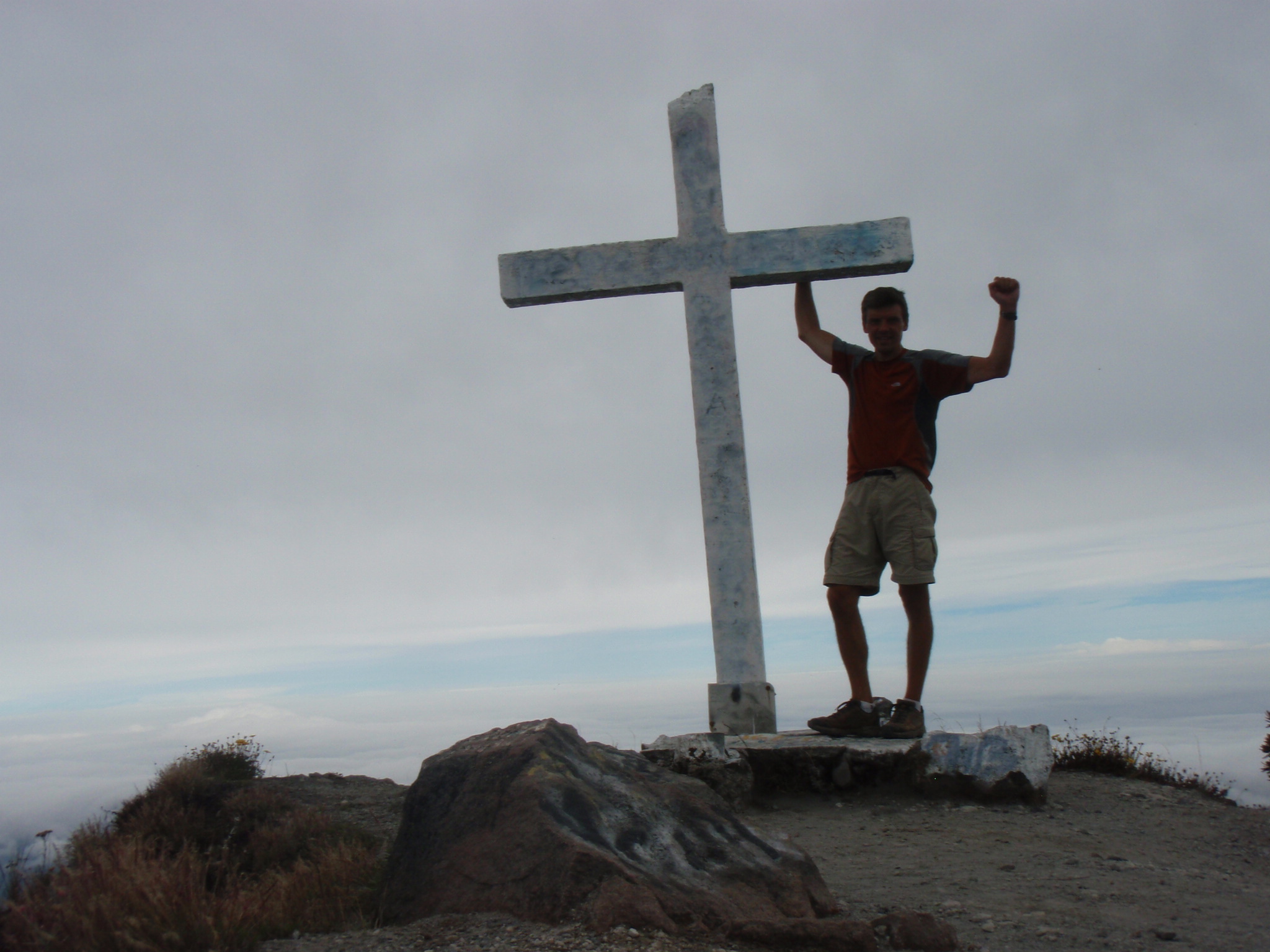 The last country on the first part of my journey is Panama. I crossed the border on December 18 and rode to the town of David. There I found a hotel near the bus terminal, arranged for my bike to be stored there for one night, changed into hiking cloths and hopped on a bus North to the little town of Boquete. This village in alpine setting around 1000m ASL is a nice contrast to the hot and humid climate near the Coast. Up here it reminds me of some of the mountain villages in Austria, with a river flowing through town and fresh cool air at night. I found a hostel next to the river with Internet, so I could update my SPOT page and check email. For the next morning I would get a cab and drive up to the National Park entrance. 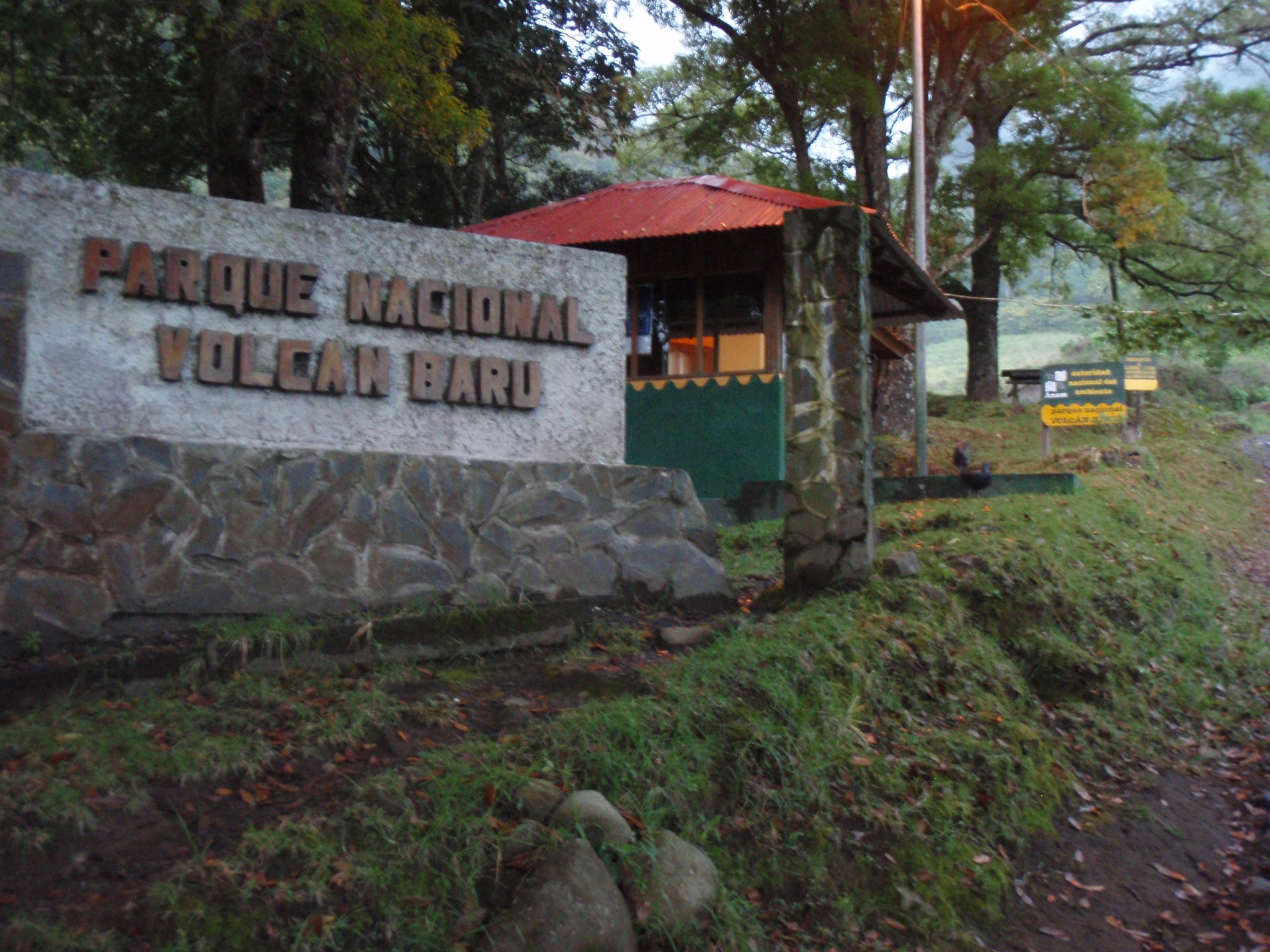 Volcan Baru has an altitude of 3474m, which makes it the high point of Panama. From the NP entrance there is an elevation gain of about 1700m, plus a little bit of up-&-down along the way. In many descriptions it is recommended to hike up one day, camp near the top, get to the summit the next day at sunrise and then hike down. Alternatively, some guides offer to ascend at night to see the sunrise from the summit. The allure is to see both the Pacific and Atlantic at the same time when it’s clear in the morning. However, there was rain last night and it was generally cloudy, so I didn’t feel that sunrise would be visible or even without clouds. Secondly, I didn’t want to ascend the entire way in the dark. So I started the hike just around the first daylight. 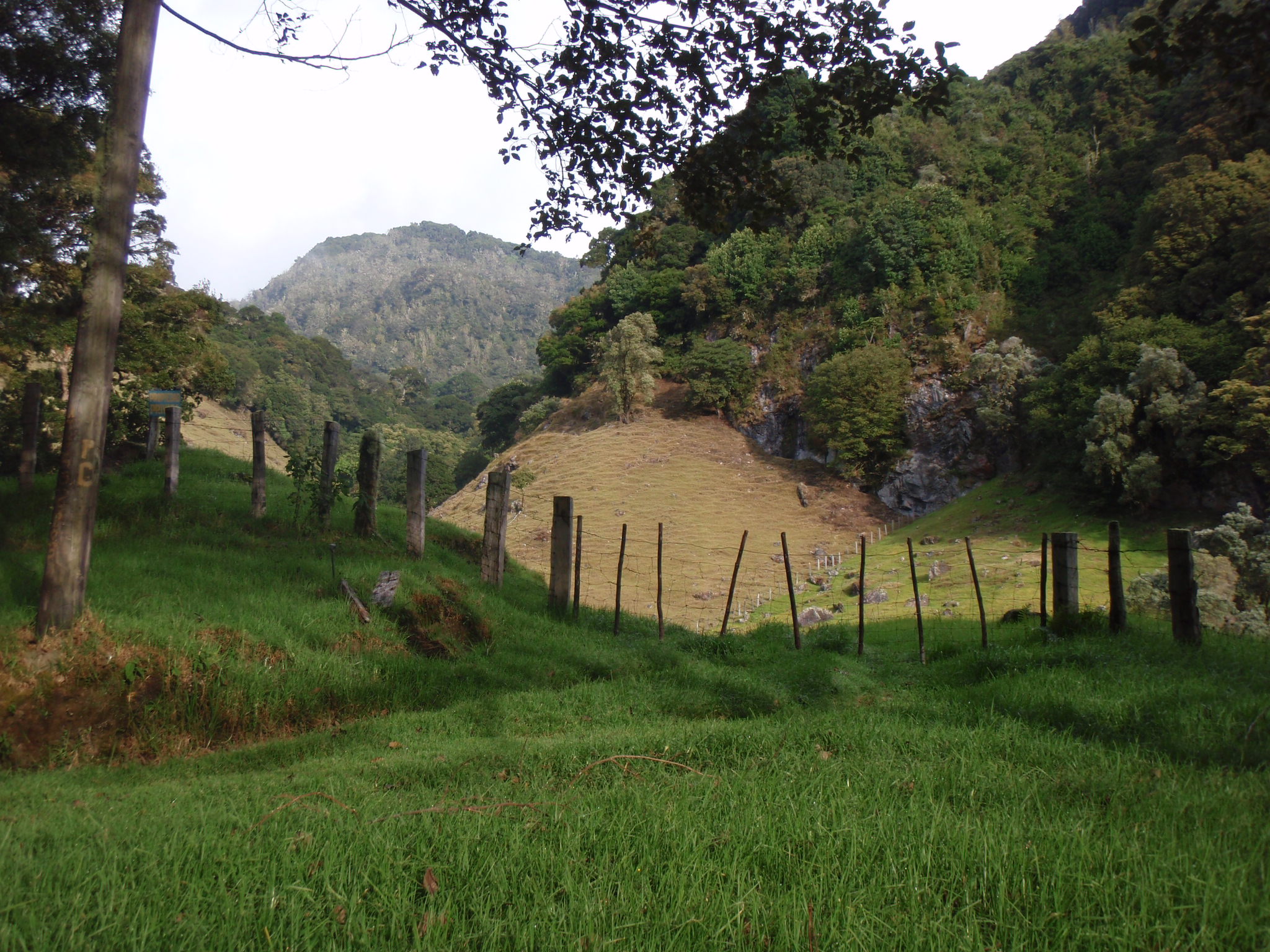 The paths climbs mostly through cloud forest, with the occasional nice meadow. This is a 4-wheel drive track, pretty rough, but I did see both two ATVs and later two regular jeeps making their way up there. The reason for this road: There are about a dozen radio antennas near the top. 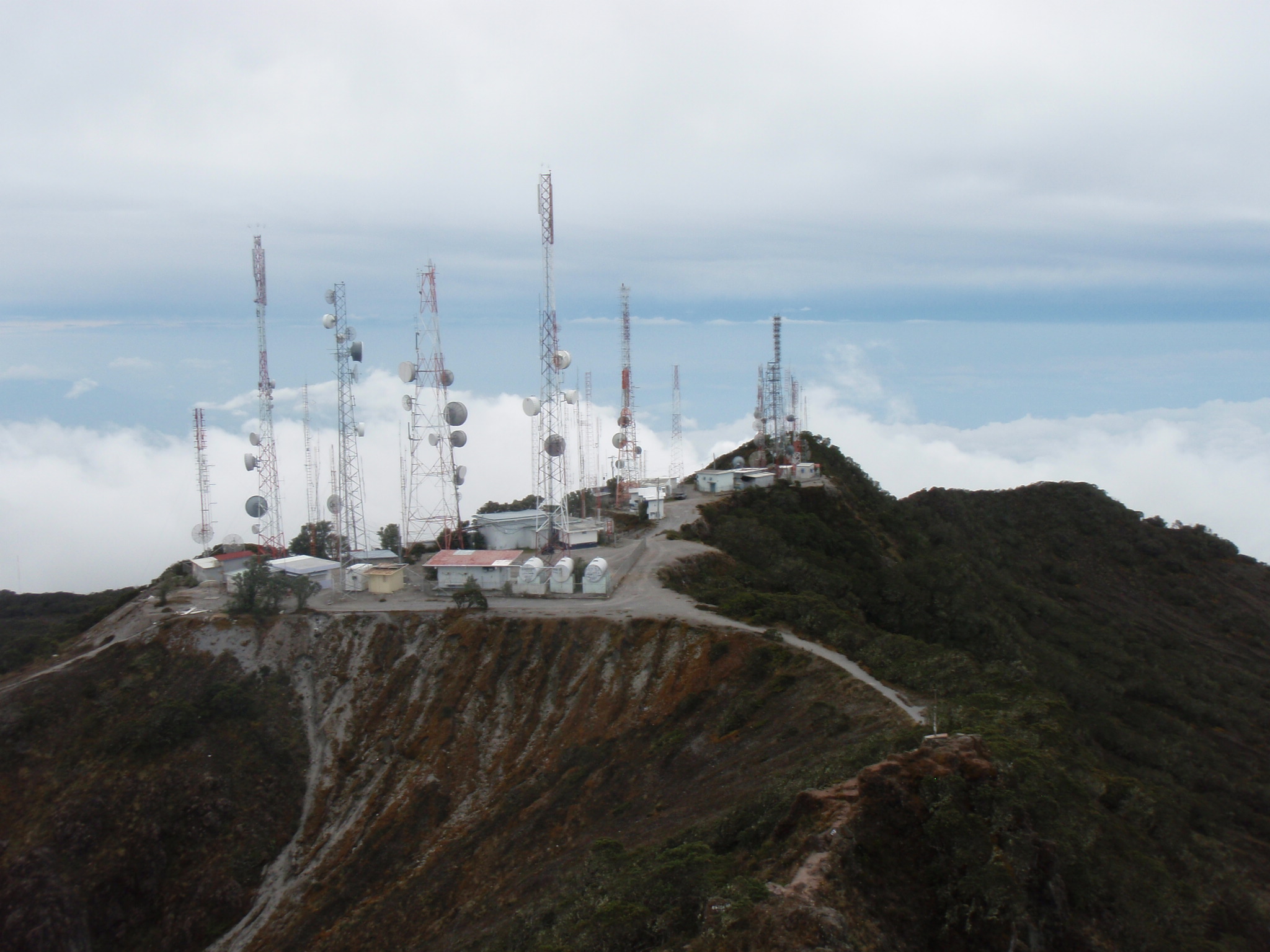 From those it is only another 10 minutes to the top of Baru. I could see the Pacific Ocean, but the Atlantic was completely covered in clouds. 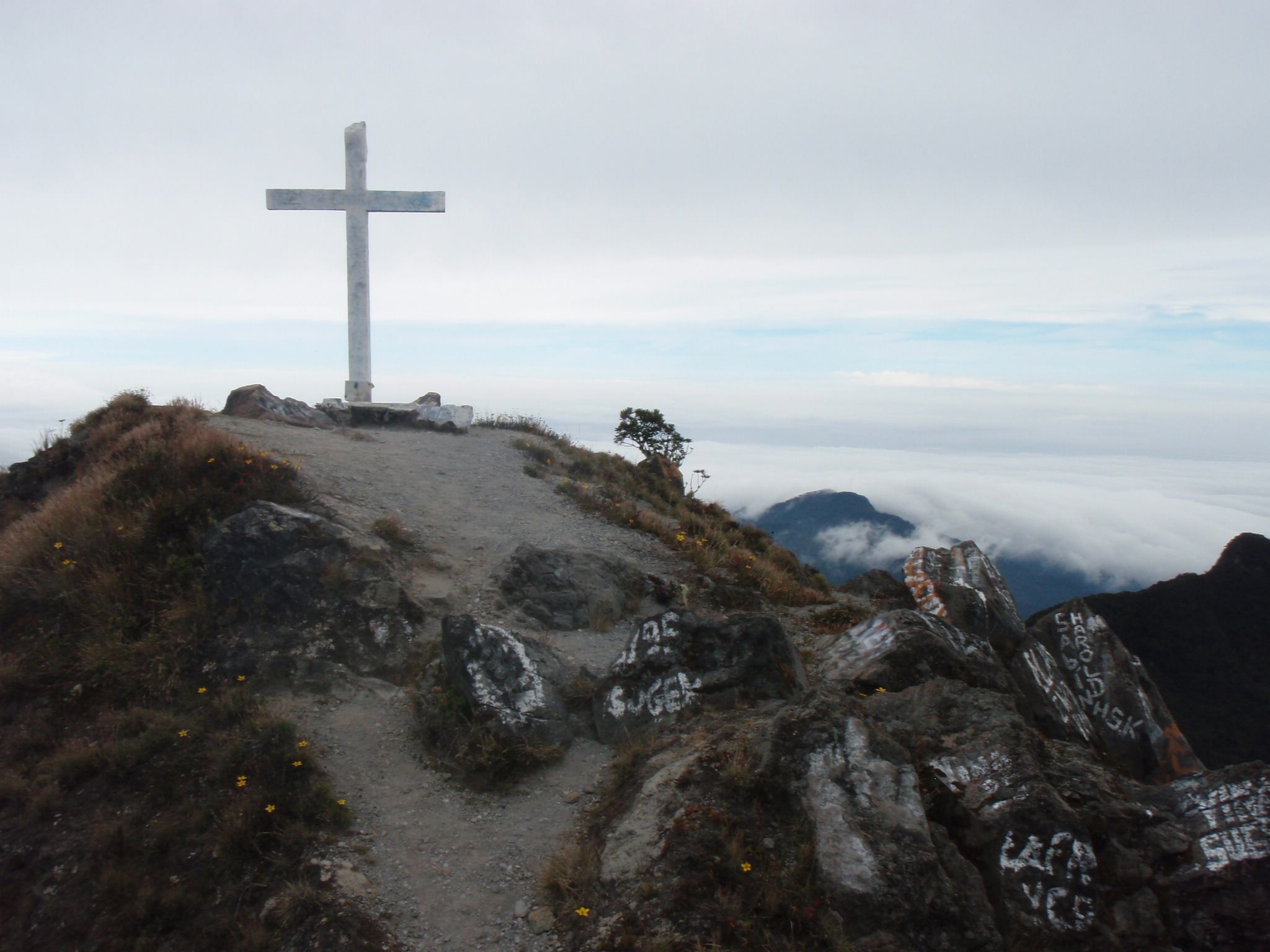 I went back by bus from Boquete to David and stayed there one night in the hotel. The next morning it was back to the hot and humid weather on the road. It was December 20th and I needed to be in Panama City (450 km) on the 23rd. No time for rest days, unfortunately. Instead I decided to go about 130 km each of the first three days. 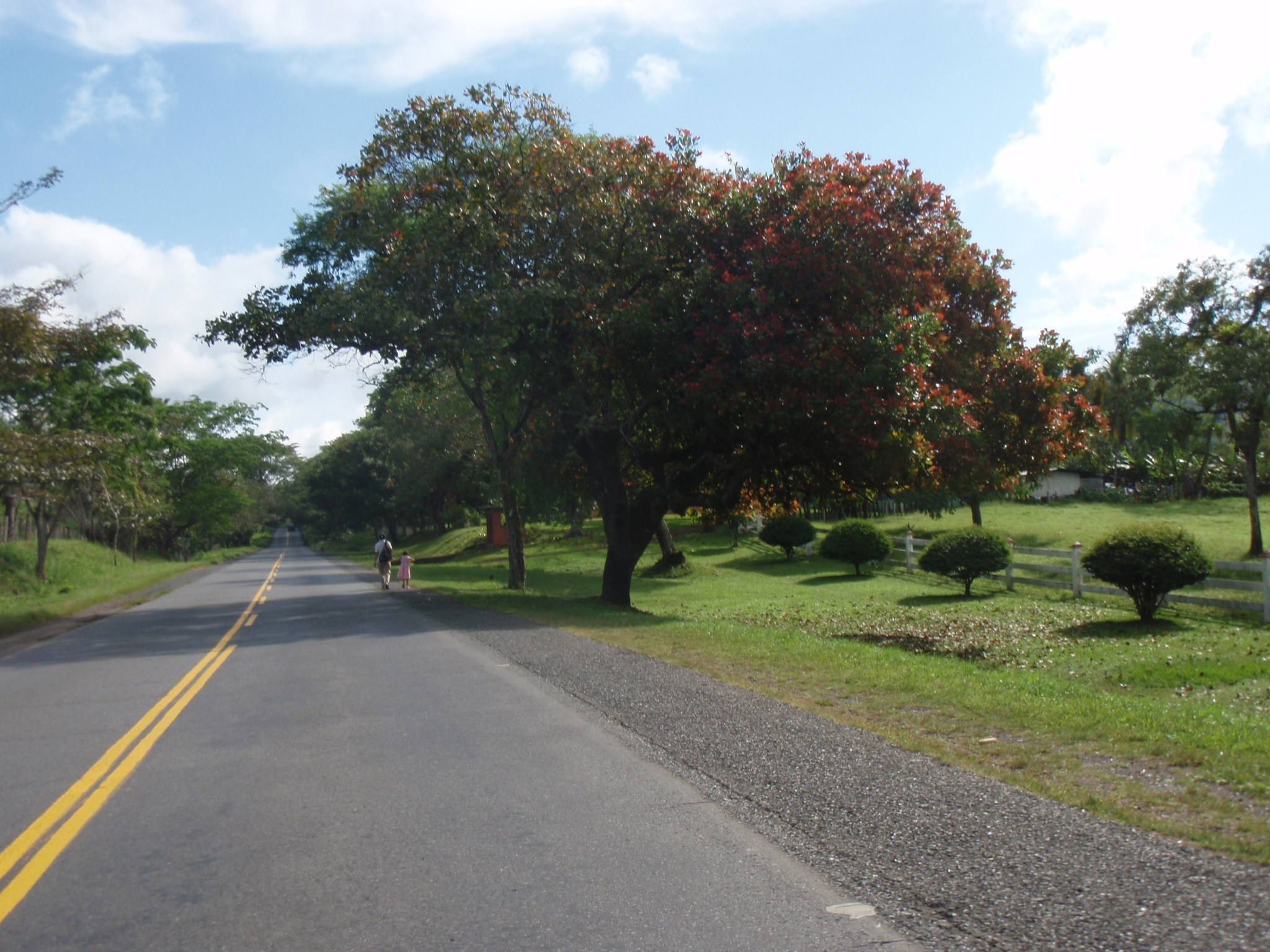 Stefan Dudli (who owned my bike before and rode here on it 2 years ago) described this section on his website (www.panamerica.ch) as “HHH”: Hills, Heat, Hunger. My main problem now was the extreme heat. Often it got up to 37C (100F) and climbing the hills in stale, humid air was just extremely tiring. Throw in some Diesel exhaust of passing buses and then run short on daylight at the end of the day – this made this section very trying. 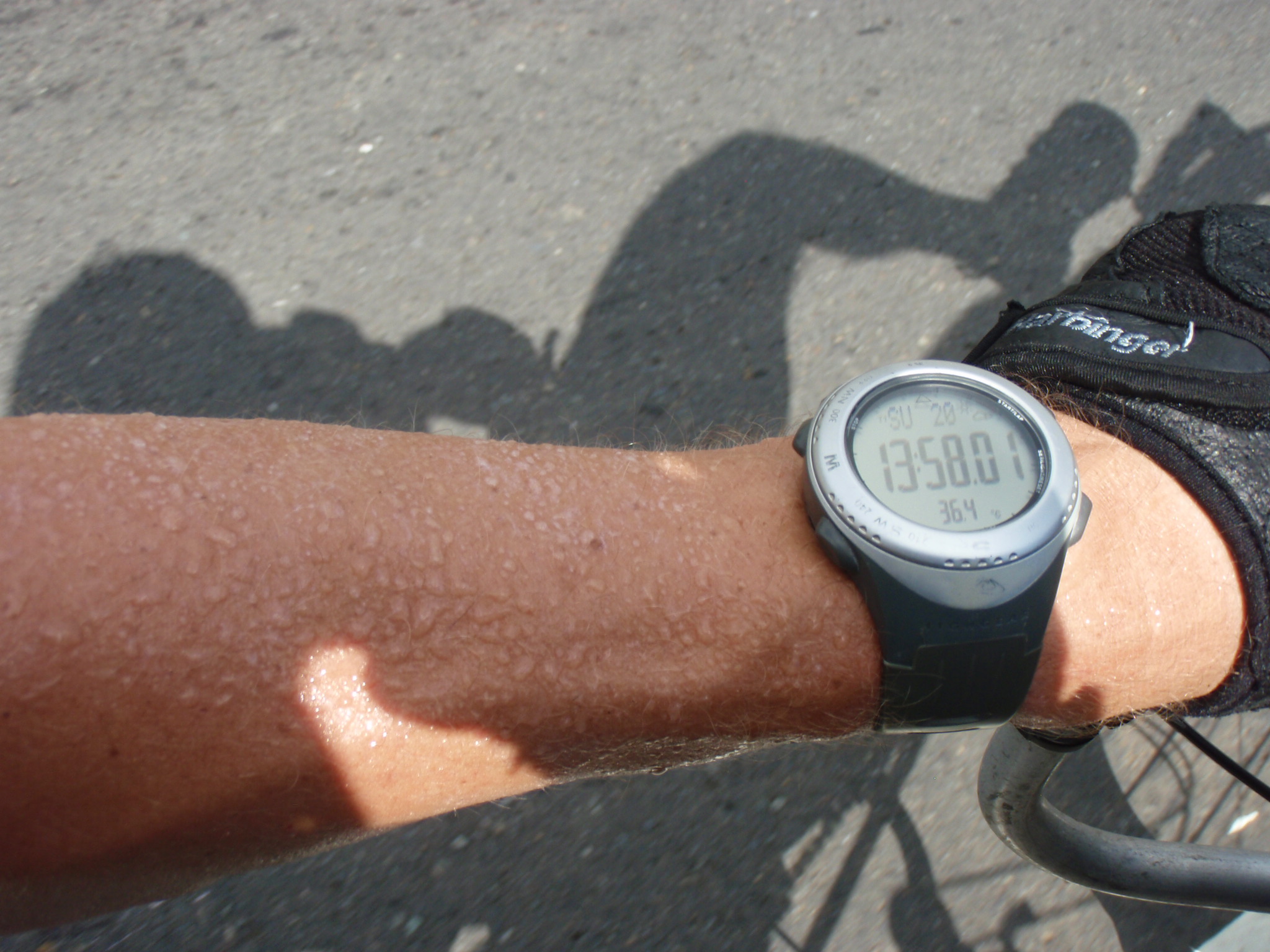 One day I ran out of daylight at a hilltop and looked for some place to stay. As there was no hotel I asked at the local police station and sure enough I could camp on their grounds. 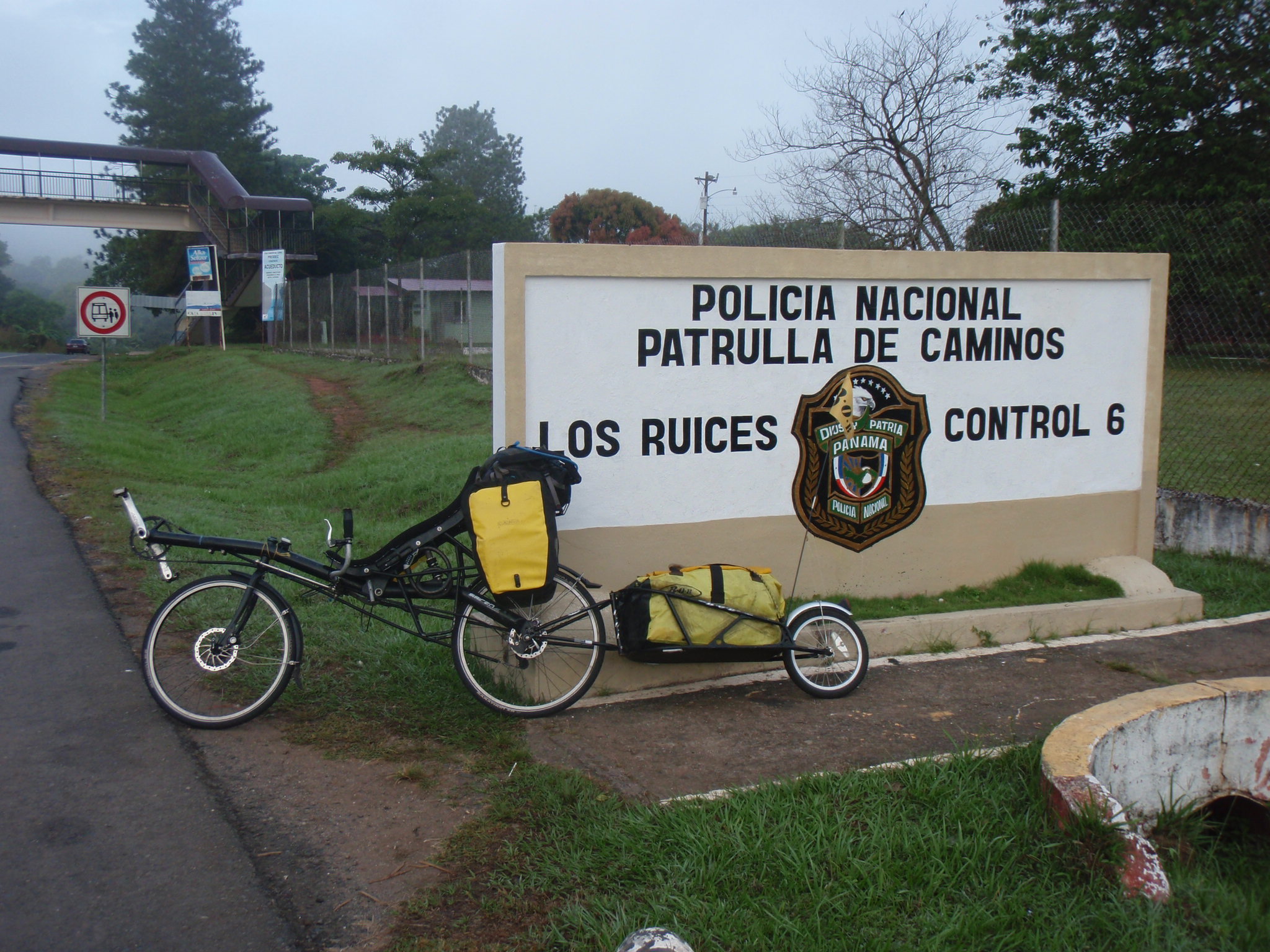 Two days later I had a similar problem when the only hotel in town (Capira) had been closed and abandoned a few years ago. I asked the local firefighters and they let me camp on their grounds. 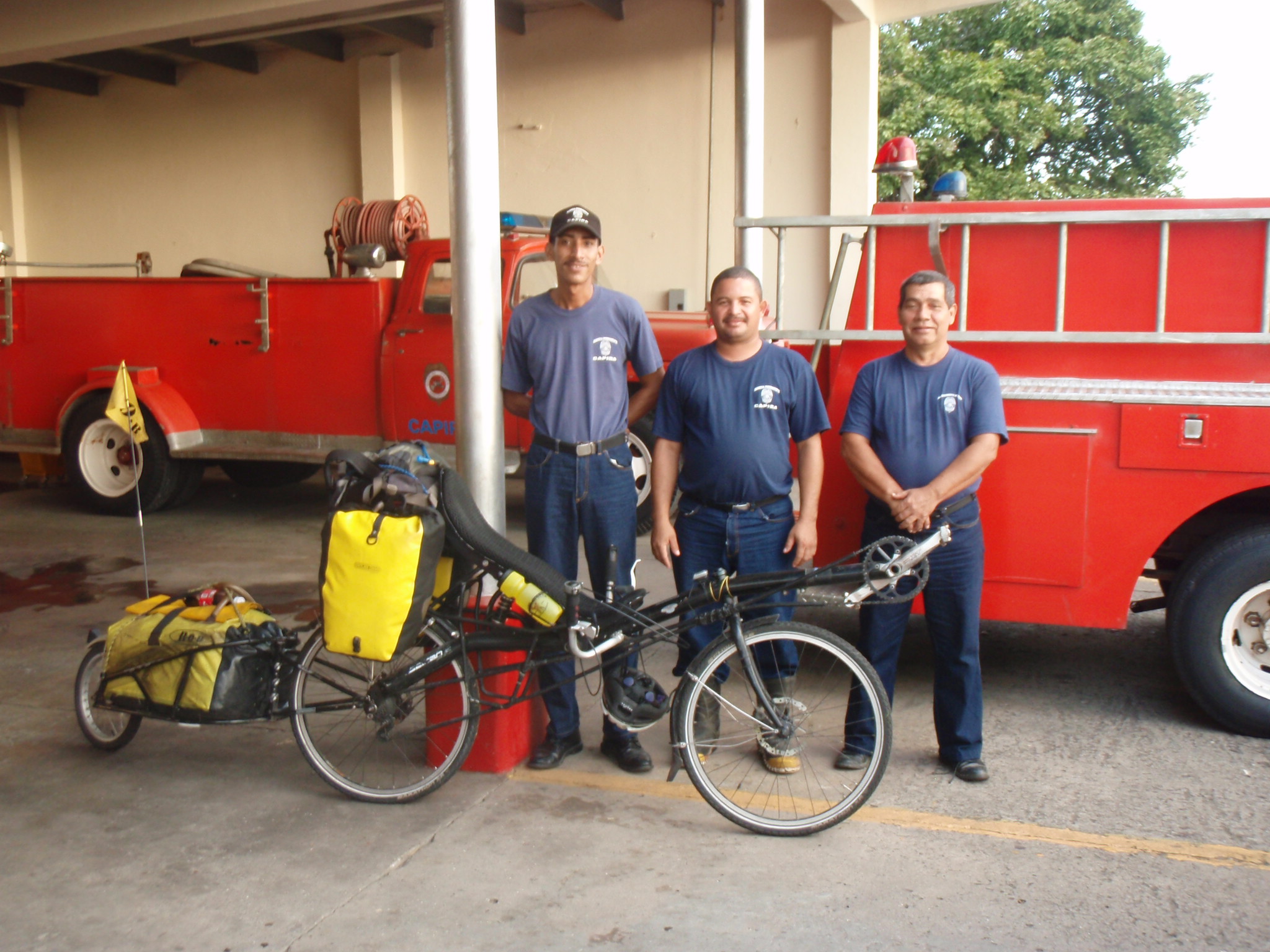 The last day had a much shorter ride, as I needed to get to near the airport with at least a half day to pack my bike. The 55 km from Capira to Panama City were relatively easy, but for the very poor quality road (50 year old cement road with lots of cracks and bad shoulder). 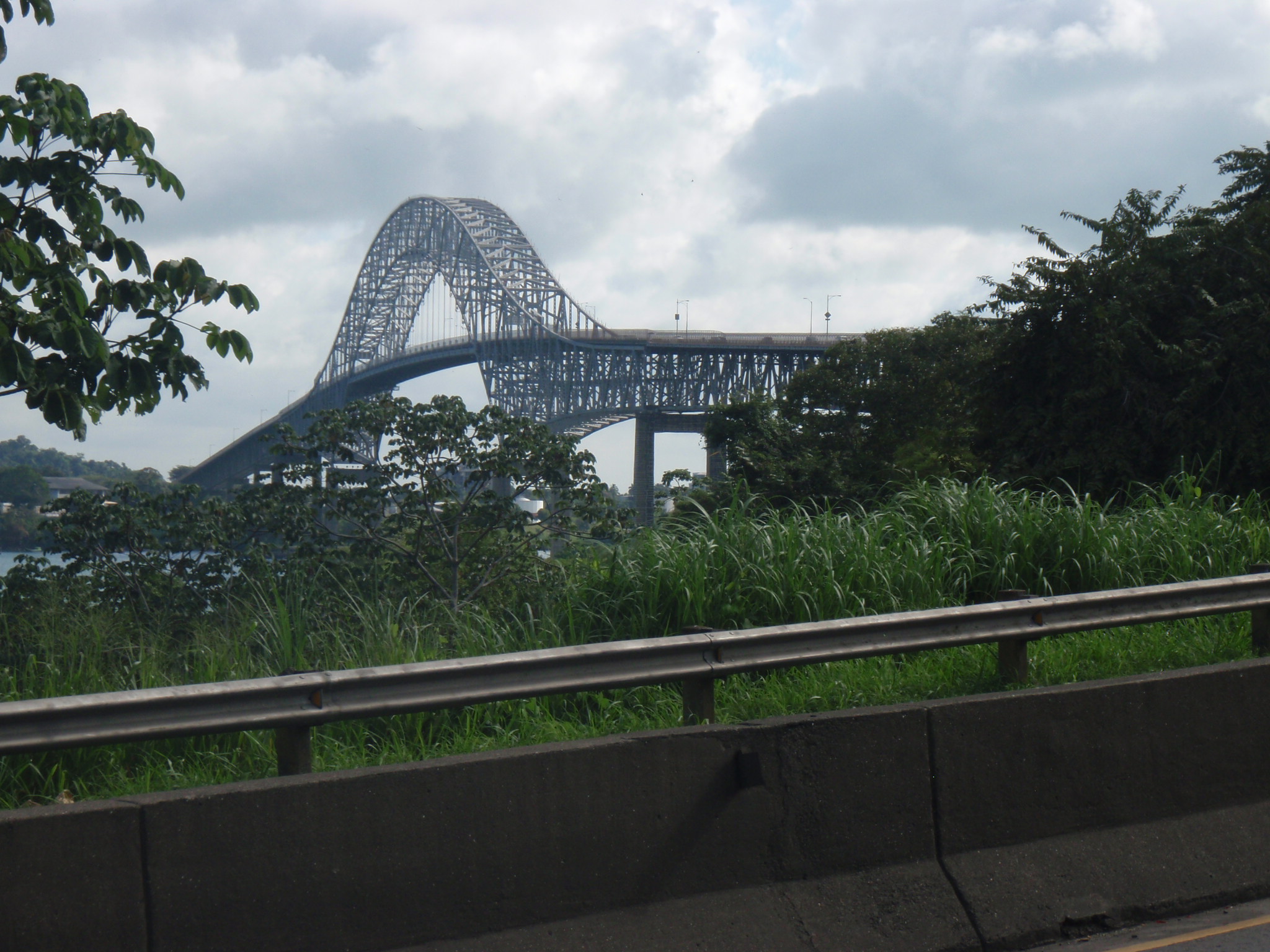 The last couple of km leading up to the bridge over the Panama Canal, the Puente de las Americas, were especially busy and narrow, some of the most dangerous riding on the entire trip. But the scenery over the bridge was a real highlight, and a geographic endpoint to this part of my journey. When I rolled down the other side of the bridge, emotions welled up and some tears of joy and relief rolled down my cheeks. 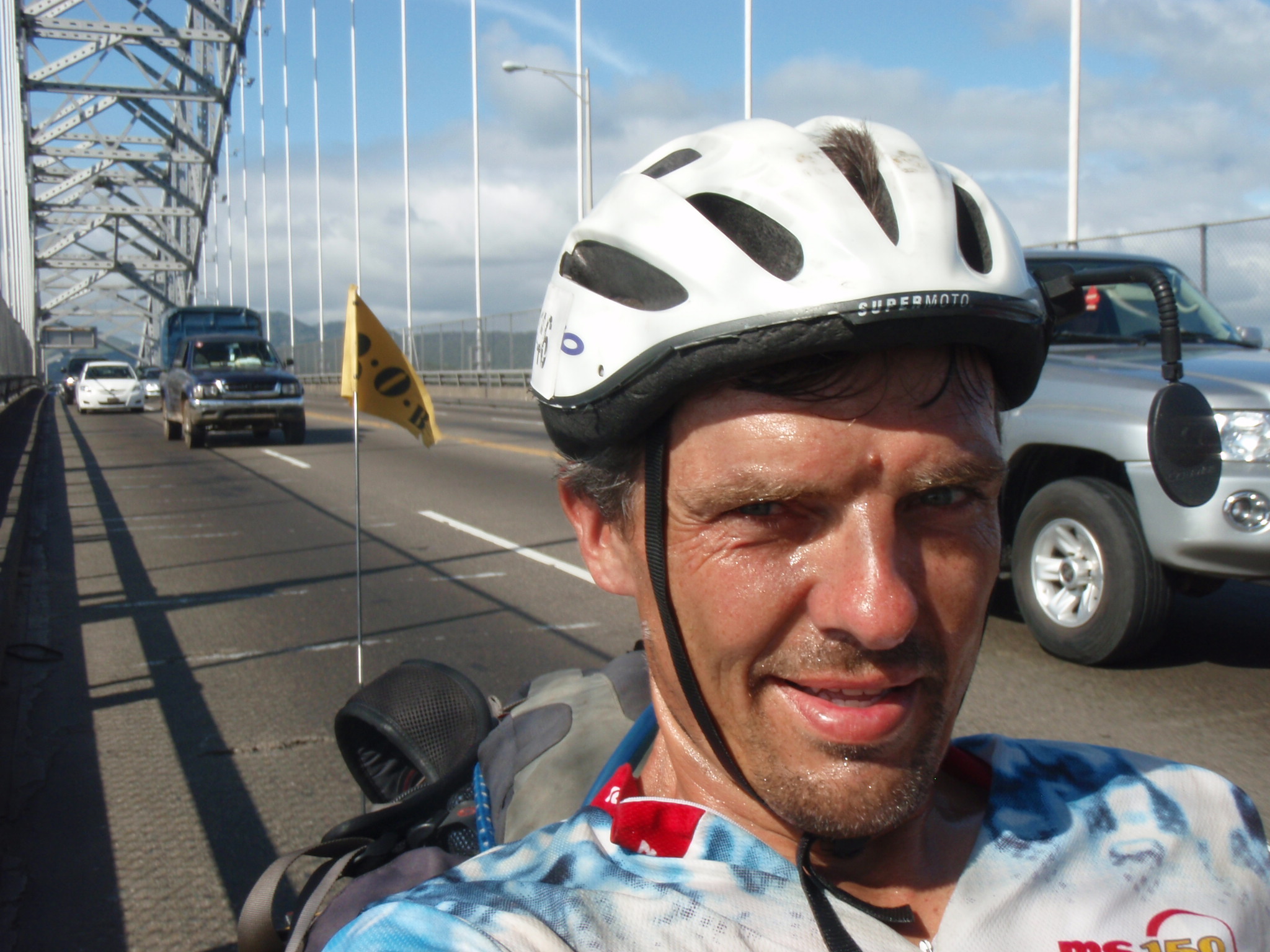 No time to slow down yet, though. I still needed to cross Panama City and get to the airport. They say Panama City is like Miami, except you hear more English spoken there 😉 It’s true, the skyline right along the water is very similar to Miami, and there is a lot of construction going on. 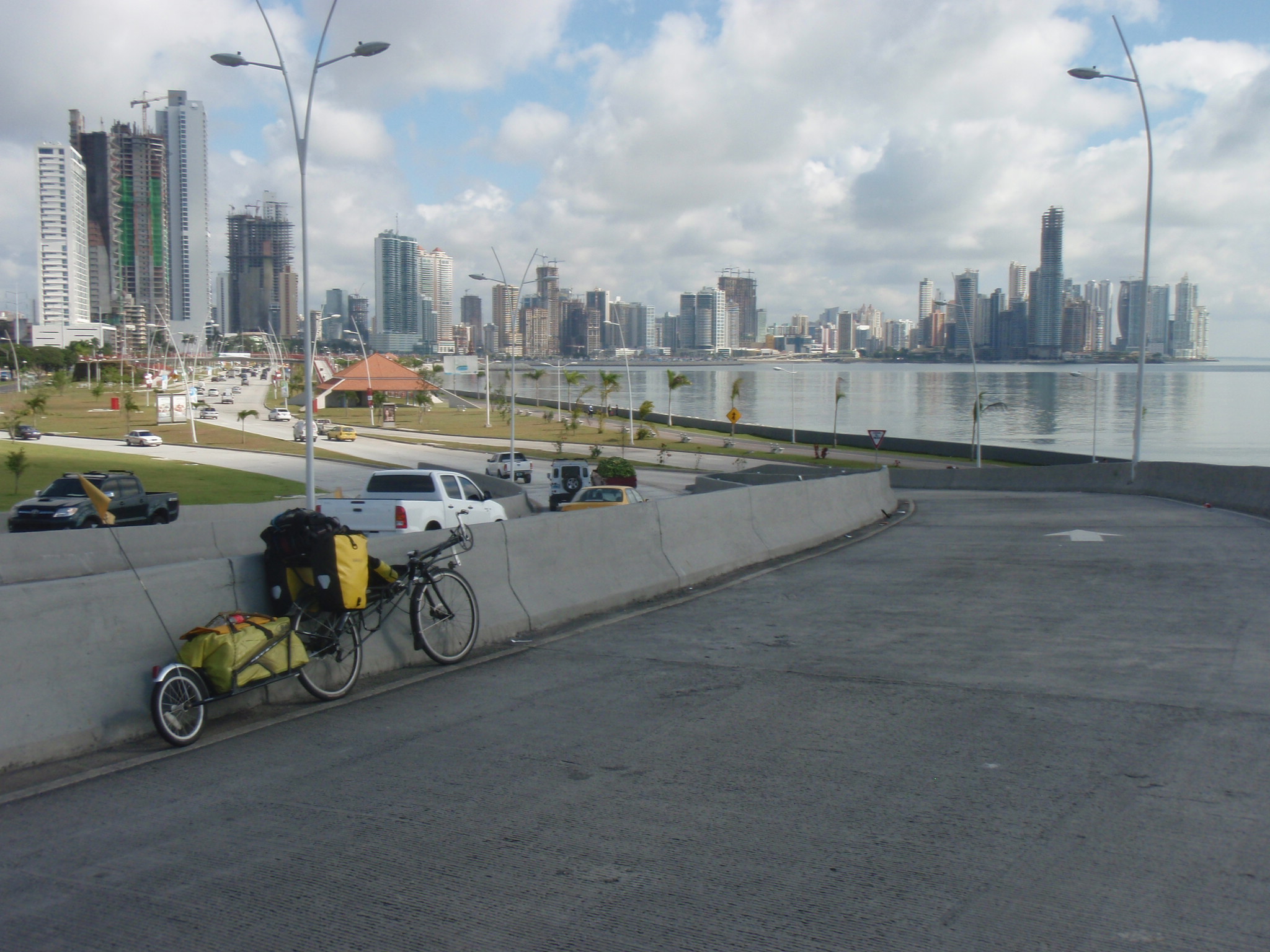 The rest of the day was pretty hectic: I looked for some breakfast with WiFi, but didn’t find WiFi despite checking in 5 places! So I continued to ride towards Tocumen about 20 km East of Panama City to get to the International Airport. There I checked into the main hotel, even though it’s prices are American. (I paid more for this last night than for all my stays in the last week or two.) But I needed a spacious room and I hadn’t had a shower in two days… Then I did my laundry and went to a nearby bike shop to get a box to pack my bike into. Cleaning and disassembling the bike took 3 hrs, almost as much time as the ride today. I also needed to pack my trailer and two panniers, plus dry out the tent and just generally sort my stuff. In between I had dinner and sent email as well as wrote this Blog post.

After nearly 6 months, 13.765km and 745 hrs of riding I had covered the entire distance from the Arctic Ocean to the Panama Canal. Except for the bus ride through Mexico City I rode my bike the entire way. And I hiked the 10 high-points of Alaska, Canada, U.S., Mexico, Guatemala, El Salvador, Honduras, Nicaragua, Costa Rica, and Panama. Except for not reaching the summit on Denali, the Panamerican Peaks adventure went very well according to plan so far. I am very pleased with Part 1. Now for a 2 week break at home for Christmas and New Year, then on to South America for Part 2.

This entry was posted in Peaks, Rides. Bookmark the permalink.